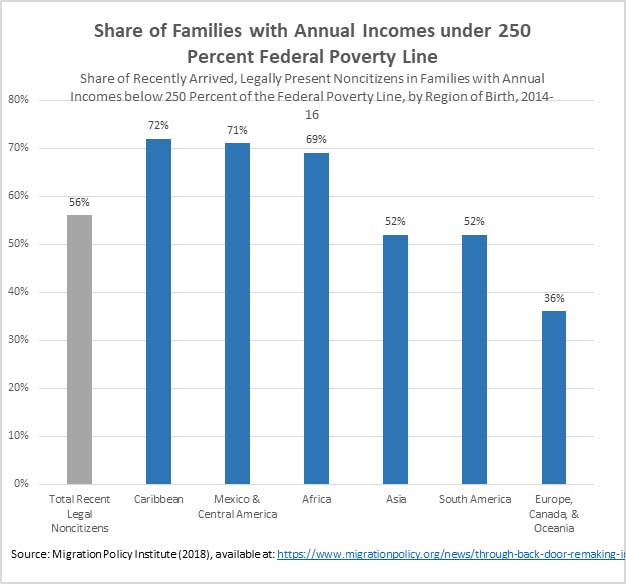 Today the Trump administration published a proposed rule that would, if finalized, dramatically redefine a century-old provision of immigration law. Since 1882, the United States has barred immigrants from entering the country or adjusting their status to become lawful permanent residents if they are found to be “likely to become a public charge.” For the last several decades the United States has recognized that immigrants of all social and economic backgrounds have something to offer the country, and administrative agencies have interpreted the law to bar the immigration or adjustment of status only of immigrants who are “primarily dependent” on government benefits. In practice, many lower income immigrants have passed the so-called “public charge test” with a signed affidavit of support from a family member who is already living in the United States.

The Trump administration’s proposed rule would redefine public charge, granting this administration—and future administrations—wide discretion in denying admission or green cards to lower and middle-income immigrants. Under the proposed rule’s complicated formula for deciding whether a green card applicant passes the public charge test, having family income over 250 percent of the Federal Poverty Level is the only “heavily weighed” positive factor in favor of passing the test. This is a very high bar. A family of four would have to have income or assets of over $63,000, which is above the median income in the United States. Even with this high level of income, prospective immigrants are not guaranteed to pass the public charge test.

By contrast, under the proposed rule there are many “heavily weighed” negative factors that administration officials would need to take into account that could be grounds for denying a green card. Notably, current receipt of public benefits or receipt in the three years immediately preceding the application for a green card are heavily weighted negative factors. What is more, the rule allows administration officials to consider receipt of a much longer list of benefits than is currently allowed under agency guidance. Today, only receipt of cash assistance or government-funded assistance for long term care are considered in the public charge test. The proposed regulation would add the Supplemental Nutrition Assistance Program (SNAP), non-emergency Medicaid, low-income subsidies under Medicare Part D, and housing assistance to the list of benefits taken into account when making a public charge determination. For a summary of these proposed changes, see CSSP’s visual.

Moreover, family income under 125 percent of the poverty level, or $31,375 for a family of four, would be weighed negatively under the proposed rule—whether or not the family has received any public benefits.

According to analysis by the Migration Policy Institute, the proposed rule could make it especially difficult for people from Asia, Latin America, and Africa to immigrate, effectively limiting the immigration of people of color and helping the administration realize its racist immigration agenda. Among recently arrived, legally present noncitizens, immigrants from the Caribbean, Mexico and Central America, Africa, and to a lesser extent Asian and South America, are more likely to have incomes under 250 percent of the poverty level compared to immigrants from Europe, Canada, and Oceania.

If finalized, the rule would not only alter the demographics of who is able to come to the United States, but it would also threaten the well-being of children and families already living in the United States. There is compelling evidence that many immigrants are already withdrawing from or not applying for public benefits to which they are legally entitled and which serve as the foundation for health and well-being because of the rumors in advance of this rulemaking. The proposed rule could lead many additional immigrant families to withdraw from critical supports, even if they are not subject to a public charge determination. After the passage of the 1996 welfare law, which restricted access to benefits for many immigrants, researchers found that immigrants withdrew from benefits even if their eligibility was unchanged by the law—spurred by confusion and fear about the potential consequences of receiving benefits. Unless steps are taken to inform immigrant communities and address their fears, the proposed rule is likely to have a similar chilling effect on immigrants’ access to medical care, nutritional assistance, and other crucial supports.

For all of these reasons and more, the proposed rule is problematic. But we have a voice in this process. The rule will not be finalized until the administration has reviewed and responded to public comments. To submit your comment, go to https://www.federalregister.gov/documents/2018/10/10/2018-21106/inadmissibility-on-public-charge-grounds. Comments must be submitted by December 10, 2018.